If you’ve ever spent any amount of time online, you’ve probably come across a cute little guy by the name of Doug the Pug. By living a life that’s enviable by both puppy and human standards, this nugget has made quite a name for himself.

With almost two million followers on Instagram, it’s clear that Doug the Pug is here to stay, so what’s his secret to achieving Internet glory? Well, it could be his undeniable charm…or it could be his uncanny resemblance to us as we try (and often fail) to be our best selves. Don’t believe me? These photos prove beyond reasonable doubt that Doug the Pug is all of us. 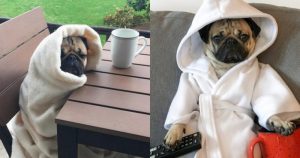 1. He knows that Sundays are for being dead to the world and generally useless.

2. He will wear blankets as clothes until livable temperatures melt this wintery hellscape.

3. He doesn’t actually know what to do with children.

4. He’s amazing at abiding by his New Year’s resolutions…for 24 hours.

5. He’s a best-selling author. Just kidding. That’s not us at all.

7. He knows that drinking an entire bottle of wine alone on a Wednesday is totally fine, no matter what your mom (or neighbor, or sister, or best friend, or spouse) says.

8. He warms the frozen tundra of his soul with bathwater and alcohol.

9. His favorite coping mechanism is being Beyonce.

10. He self-identifies as a burrito.

11. He knows that every day is an existential crisis just waiting to happen.

12. He sees vegetables for what they really are: edible sadness.

14. What he can do, however, is eat for days on end if necessary.

15. He views laziness as a lifestyle choice.

17. He ignores the fact that he’s being crushed by crippling debt when payday rolls around.

18. When it comes time to procrastinate, he goes to desperate lengths.

19. He hides behind his shades so he can’t see the haters.

20. He knows that bad things happen to good people.

What did I tell you? The only way that Doug the Pug could be more like us is if we all became confusingly cute and gained millions of followers on social media. Don’t worry, though. We have that crippling debt situation on lock.