“I feel like she smells like patchouli oil,” Giuliana Rancic said. “Or weed,” another host added. Update: Rancic has apologized in a video message.

1. Fashion Police‘s Academy Awards special on Feb. 23 angered viewers after host Giuliana Rancic described Zendaya’s locs as making her look like she “smells like patchouli oil.” “Or weed,” someone added.

The hairstyle was a new look for the young singer, who most recently sported a pixie cut.

3. People were horrified at the comment, which many interpreted as racially loaded.

Not that it matters @GiulianaRancic , but in case you were wondering my locs smell like shea butter and college tuition.

Your racist and xenophobic statement about Zendaya’s hair wasn’t funny. Try being interesting, for once. Make it a goal. @GiulianaRancic

still waiting for @ENews & @GiulianaRancic to explain, retract and apologize for this. and @Zendaya, where are you? http://t.co/uWML0Ks4FU

8. Some also pointed out the hypocrisy of the comment, because Rancic has praised Kylie Jenner for wearing dreadlocks.

im glad giuliana rancic is catching flack for that comment. she thought kylies dreads were edgy but zendayas are dirty. hmm.

11. Zendaya herself took to Twitter to write a passionate statement about being “hit with ignorant slurs and pure disrespect,” listing scores of inspiring people who also rock the hairstyle.

13. “To say that an 18-year-old young woman with locs must smell of patchouli oil or â€˜weed’ is not only a large stereotype but outrageously offensive,” she wrote.

The singer and actress, who has been a frequent guest host on the show, added:
“There is already harsh criticism of African-American hair in society without the help of ignorant people who choose to judge others based on the curl of their hair. My wearing my hair in locs on an Oscar red carpet was to showcase them in a positive light, to remind people of color that our hair is good enough.” 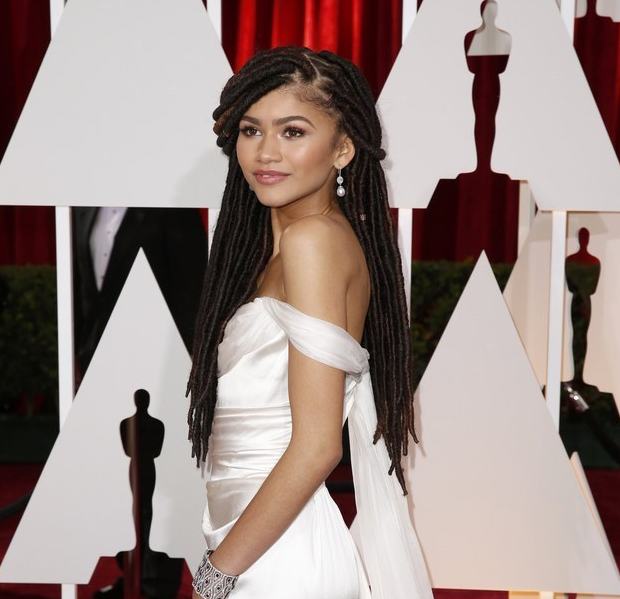 Zendaya at the Academy Awards.

15. Rancic wrote an apology on Twitter, saying her comments had “NOTHING to do with race.”

Dear @Zendaya, I’m sorry I offended you and others. I was referring to a bohemian chic look. Had NOTHING to do with race and NEVER would!!!

17. Osbourne also chimed in an hour later, saying that she and Zendaya are friends.

I WILL NOT BE DRAGED INTO THIS! The situation is being rectified like ADULTS by both parties. I hope you can leave it to them & do the same!

you guys do realize that @Zendaya is my friend right?

Osbourne denied being a part of the conversation on Twitter, saying she might leave the show because of the accusations. The post has been update as it’s not clear whether Osbourne or Kathy Griffin made the comment. BF_STATIC.timequeue.push(function () { document.getElementById(“update_article_update_time_5077047”).innerHTML = UI.dateFormat.get_formatted_date(‘2015-02-24 16:51:19 -0500’, ‘update’); });

I DID NOT MAKE THE WEED COMENT. I DO NOT CONDONE RACISM SO AS A RSULT OF THIS IM SEREIOULSY QUESTIONONIG STAYING ON THE SHOW!

22. Representatives for E! did not respond to multiple requests for comment.

The Fine Art Of The Clapback